by JWF Staff on August 2, 2016 in Inspirational Heroes, Worldwide Violations 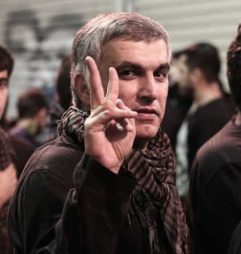 Nabeel Rajab, a 51-year-old prominent Bahraini opposition leader and the president of the Bahrain Centre for Human Rights, is facing trial over criticising Saudi involvement in Yemen on Twitter. Rajab was charged with “insulting a statutory body” and “spreading rumours during wartime”. If convicted, he is facing up to 15 years in prison under Bahrain’s penal code.

Rajab was first arrested over the tweets in April 2015 and released a few months later by royal pardon. However, the cases were not closed and Rajab was arrested again over them on June 13, 2016. His trial opened on July 12 and the next trial hearing was rescheduled for September 5, 2016.

Rajab’s official Twitter account, which is currently run by volunteers, has reported that since his arrest he has been taken to hospital on one occasion for heart problems after an extended stay in solitary confinement.

This is not the first time Rajab has been arrested over speaking out against injustices. Between 2012 and 2014, Rajab served time in prison for organising and participating in illegal protests.

Rajab’s struggles and work have been internationally recognised throughout his advocacy for human rights in Bahrain. In 2011, Rajab was awarded a Democracy Award from the Woodrow Wilson Center, and after this release from jail in 2014, he toured through Europe, visiting the UNHRC in Geneva and the European Parliament in Brussels.

According to the Freedom House’s 2015 report, Bahrain is marked as “Not Free”. All broadcast and newspaper companies are owned by the government and vaguely worded legislation encourages self-censorship. A wide range of opposition websites are officially blocked. This includes any organisation that could cover potential protests as live events.

@NABEELRAJAB was arrested in #Bahrain "simply for speaking about our suffering". His letter is being read at #OsloFF pic.twitter.com/k7m5BIykg7