Horrific: Reports that Bassel Khartabil Has Been Executed in Syria 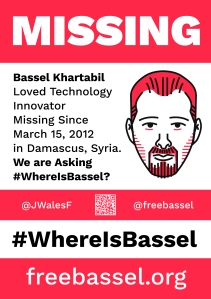 Troubling news coming out of Syria about the death of Bassel Khartabil, the Wikipedian and Head of Creative Common in Syria, who has been imprisoned in Syria since March 15, 2012. Bassel was reportedly executed shortly after his disappearance in 2015, but no formal information was ever given to his family and loved ones.

Bassel is a Palestinian Syrian national whom his love of technology has got him into trouble in Syria, as the revolution of 2011 has taken place.

Bassel, the lead of Creative Commons Syria, had been detained in an undisclosed location for 9 months until he was transferred to Adra prison, where he finally gained access to see his family and wife on a weekly basis.

On October 3, 2015, Bassel disappeared. Reports claimed that his name was stricken off the prison register and he was taken away by security forces from his cell to an unknown location.

Today we received the horrific news that Bassel was executed immediately after his disappearance nearly two years ago.

Foreign Policy magazine named Bassel one of its Top 100 Global Thinkers of 2012, “for insisting, against all odds, on a peaceful Syrian revolution”. In March 2013, Index on Censorship awarded Bassel the 2013 Digital Freedom Award for his work using technology to promote an open and free Internet. Following his disappearance, the MIT Media Lab offered Bassel a research scientist position in the Media Lab’s Center for Civic Media.

The Creative Commons Board of Directors called for Bassel’s immediate and safe release in a resolution at its most recent meeting. In November 2015, Bassel was offered by the board a position as a Digital Cultural Preservation Fellow. His numerous and impactful contributions to the open web and the commons have always inspired collaboration, community and the sharing of culture and knowledge.

Bassel, an open source software developer, was a key contributor to projects that digitize, preserve, and share cultural heritage works. The #NEWPALMYRA project, co-founded by Bassel, is an online community platform and data repository dedicated to the capture, preservation, sharing and creative reuse of data about the ancient city of Palmyra. It features 3-D models of ruins from Palmyra. Bassel’s life project continues to develop these days by his friends, who were hoping for his safe return but were shocked today to learn about his horrific death.

The Jimmy Wales Foundation launched with the Free Bassel group the #WhereIsBassel campaign. The #WhereIsBassel campaign has spread globally. On March 19, 2016, marking the week of the 4th anniversary of Bassel’s arrest, people from all over the world asked together: #WhereIsBassel? London, Berlin, Paris, Toulouse, Sicily, Boston, San Francisco, Shenzen, Singapore and Beirut – all called out for the Syrian government to reveal Bassel’s whereabouts and send him free. Unfortunately, our joint cry was unsuccessful.

Jimmy Wales and The Jimmy Wales Foundation are strongly condemning the criminal execution of Bassel, an innocent activist, and sending our deep condolences to Bassel’s wife and family.

One thought on “Horrific: Reports that Bassel Khartabil Has Been Executed in Syria”