by JWF Staff on December 1, 2016 in Worldwide Violations 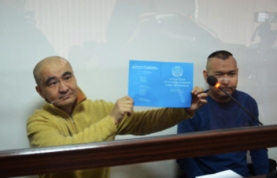 Human rights defenders Max Bokayev and Talgat Ayan were sentenced on November 28 in Kazakhstan to 5 years in prison for organizing peaceful protests earlier this year and publishing critical posts on Facebook.

The charges ranged from ‘institution of social discord’ under Article 174 of the Criminal Code, ‘dissemination of knowingly false information’ under Article 274, to ‘violation of the procedure of organisation and holding of meetings, rallies, pickets, street processions and demonstrations’ under Article 400. On top of their prison sentence, the two are prohibited from engaging in social activities for 3 years. The activists intend to appeal the sentence.

The human rights defenders from Atyrau, Western Kazakhstan, were first arrested on May 17 over Facebook posts critical towards the government. On their social media posts, the two had declared their intention to participate and called others to join the approaching protests calling for the abolition of amendments to the Land Code. They were sentenced by court to 15 days of administrative detention for ‘organising and holding peaceful assemblies’.

A day before their designated release date from the administrative detention, the activists were charged by the National Security Committee with criminal offences over their Facebook posts and their role in organizing the protests. The activists’ trial which ended in their  conviction was reported to have had severe procedural violations which breached their right to fair trial.

According to the Freedom House’s Freedom of the Net report for the year 2016, Kazakhstan is marked as ‘Not Free’. Social Media platforms are being blocked, political and social content is being censored and bloggers are being arrested for expressing their opinions online. The press freedom in the state is also marked as not free.

According to the report, social media and communication apps were throttled during widespread land reform protests in May 2016. Additionally, content hosting platforms, such as Tumblr and Sound Cloud, were blocked by authorities in order to ‘block extremist content’. The report presents another worrying development for internet users’ privacy in Kazakhstan:

Bokayev and Ayan’s unjustified harsh sentence is another worrying sign for Kazakhstan’s crackdown on freedom of expression and freedom of assembly.

One thought on “Kazakhstan: Human Rights Defenders Sentenced to Five Years Over Critical Posts on Facebook”