by JWF Staff on September 1, 2017 in Worldwide Violations

Roya Nobakht, a UK-Iranian citizen who was jailed in Iran over criticizing government on Facebook, was released on Friday, August 25, 2017, after serving 5 years in prison. She is currently subjected to a 2-year travel ban until her reduced 7 years imprisonment sentence will be completed.

Roya Saberinejad (also spelled “Saberi-Negad”) Nobakht is a 49-year-old Iranian-British woman, who served time in an Iranian jail after posting comments on Facebook criticizing the Iranian regime for being too controlling and “too Islamic”.

Roya was arrested in October 2013, during a visit to her family in Iran under the suspicion of “gathering and participation with intent to commit crimes against national security” and “insulting Islamic sanctities”, a crime which carries in Iran the death penalty.

Although she had legal representation during her trial, reports indicate that Roya’s lawyer was not allowed to speak on her behalf.

On 27 May 2014, Roya was sentenced to jail for 20 years. Her sentence was later reduced in a retrial to 7 years, although no formal documentation was provided to confirm the reduced sentence.

Her supporters report that she has been subjected to harsh physical and psychological torture – including being made to stand in the bitter cold wearing wet clothing – as well as solitary confinement while in prison.

Roya, who is of Iranian heritage, has lived in the past 7 years prior to her arrest in Stockport, near Manchester in northern England. In October 2013, Roya flew to Iran to visit her relatives. Two weeks into her trip, she landed in the south-western city of Shiraz and was arrested at the airport by the Iranian cyber police.

Roya was put on trial along with seven other Iranian bloggers and social media activists. They were charged with “colluding and gathering against national security, propaganda activities against the system, insulting sacred symbols, insulting the head of the government branches and insulting specific individuals”.

The eight defendants were:

It was reported that The Supreme Court in Iran has confirmed the sentences of the eight, accumulated to a total of 133 years in prison.

At a later retrial, Roya was allowed for the first time to defend herself. Reports stated that her sentence was reduced to 7 years in prison, along with the reduction of the sentences of the other bloggers.

Roya was informed about her reduced sentence verbally, and neither she nor her family were given any written confirmation about her sentence reduction. 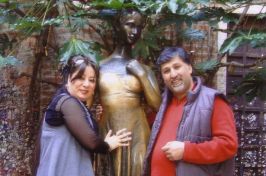 Both Roya, who was an English student at Stockport College, and her husband Taghipour, a part-time chef, are naturalised British citizens. Iran has executed dual-citizenship holders before, such as Iranian-Dutch citizen Zahra Bahrami, who was accused in 2011 of creating anti-government and anti-Iranian propaganda.

In November 2012, the Iranian blogger Sattar Beheshti died in custody after being arrested by the Iranian Cyber Police unit for criticizing the Iranian government on Facebook. His death followed a complaint he made about being tortured in prison.