What Will Happen to Iranian Refugee Cartoonist “Eaten Fish” When Manus Center Shuts?

by JWF Staff on August 7, 2017 in Main Cases, Worldwide Violations 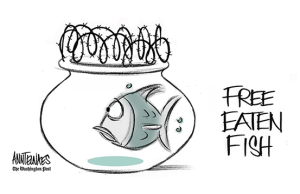 Iranian cartoonist “Eaten Fish” has been detained in the Australian-run Manus Island detention centre since 2013. As Canberra aims to close the controversial site in Papua New Guinea in October, activists are campaigning for his resettlement; but his fate remains unclear.

Trauma tends to mute the most piercing of ordeals. But Iranian cartoonist Eaten Fish still manages to draw the unspeakable, though it has been costly.

Ali Durrani, his real name, fled Iran in 2013 and eventually tried to enter Australia by boat, only to come up against the country’s refusal to admit refugees or migrants who try to land informally by sea. Instead of freedom and safety he found himself detained in one of Australia’s controversial offshore detention centres on Manus Island, Papua New Guinea.

Manus Island is like an Alcatraz of the southern hemisphere. It’s isolated, poor, and the center exists on the grounds of a military base. It’s so notorious for its harsh conditions that an Al Jazeera report described it as a “funded prison camp”.

In April 2016, the Supreme Court of Papua New Guinea found the centre to be illegal as a breach of “fundamental human rights” under the PNG constitution. It has since ordered the PNG and Australian governments to shut it down.

During his time there, Eaten Fish has been subjected to sexual assault, violence and abuse. All of which magnified his mental health problems: he suffers from severe Post Traumatic Stress Disorder (PTSD) and Obsessive-Compulsive Disorder (OCD), often scrubbing himself until he bleeds.

In a desperate act, he went on a hunger strike earlier this year. It lasted for 19 days yet achieved nothing. “I think you should give me the right to die and stop this torture and suffers and pains [sic],” he told one reporter. “I have no energy left to tell my stories to Australians any more.”

A report by the United Nations High Commissioner for Refugees (UNHCR) discovered that 88% of 181 detainees suffered from depressive disorders including psychosis. Some, like Iranian Omid Masoumali, have been driven to extremes. Last year, he burned himself to death on Nauru Island, Australia’s other offshore centre.

Despite such conditions, Immigration Minister Peter Dutton remains tough on Australia’s border policies: “No one who attempts to travel to Australia illegally by boat will settle in Australia,” he said recently. As the centre begins the process of shutting down in October, his stance is unchanged.

In November, the US and Australia reached a “one-off” agreement to resettle refugees on Manus Island and Nauru. This now seems unlikely in an exchange reported by the Washington Post between Trump and Australian Prime Minister Malcolm Turnbull, in which Trump called it “the worst deal ever”. He later confirmed this in a tweet, calling it a “dumb deal”.

What does this mean for Eaten Fish and the more than 800 other detainees? Being sent home to Iran would mean persecution, even death, so he refuses to return. Time is tight. So far, no sure solutionshave been found.

Terry Anderson, of pressure group Cartoonist Rights, informed WikiTribune that the centre at Manus is “entering a period of intensifying chaos” as parts of it are being shut down. Some of the methods being employed, he said, are: withdrawing water and power from dormitories, and a temporary relocation centre in Lorengau, which is “even more insecure, insanitary and unsuitable” than Manus.

Kurdish-Iranian journalist Behrouz Boochani, whom Eaten Fish has depicted in his cartoons, has been providing a running commentary of life on Manus Island on social media. His latest reports are on a peaceful protest against the cutting of water and power mentioned by Terry. Refugees are also protesting their removal until there’s a safe place for them to go.

Cartoonists around the world are filling the internet with cartoon fish to raise awareness. The Media, Entertainment & Arts Alliance (MEAA), Australia’s largest union for creative professionals, has called a campaign for Eaten Fish, Behrouz Boochani and actor Mehdi Savari, to be resettled in Australia on the grounds that they can make a “meaningful contribution.”

Australia is the only country in the world to have offshore processing centres, both of which local and international human rights groups condemn as inhumane. Independent MP Andrew Wilkie calls it “a gaping hole in Australia’s soul.” Indeed, Eaten Fish’s political cartoons echo this gloomy perspective. As Manus shuts down with no clear answers, the free future for which he hopes may be foreclosed.

Linh Nguyen, WikiTribune; in cooperation with the Jimmy Wales Foundation